The importance of Knowledge Waste for Intellectual Capital Management and Enterprise Performance. 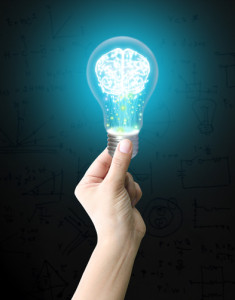 Abstract: Companies look to be ahead in its segment, or remain in the market. Therefore, it is necessary to obtain competitive advantage, going to have to continuously improve their management strategies. One of these is directly related to how innovative production processes are and how well they are managed, resulting in the launch of new portfolio of projects equal or superior to those previously produced. For this, intellectual capital and its knowledge are fundamental and its wastage management is a factor that could be determinant. Scholars sustains that the effective management of people planning must be a part of overall corporate strategy. But, how about the knowledge waste? In this context, the research highlight the problem associated with the performance of intellectual capital, may be impacted, or not by the use of knowledge in part or in whole process, the loss and / or forgetfulness, or use knowledge that does not add value for the company, its customers consequently. This work researched the databases: EBSCO; Emerald; Compendex; Scopus; ISI; and Wiley that occasioned in 506 articles which were systematically analysed, resulting in this theoretical article that presents the main references on the subject and a scientific essay regarding the importance of managing the intellectual capital knowledge waste. We concluded that managing the forms of knowledge waste, it is expected an improvement of performance and competitive advantage.

In the new era of knowledge-based companies, if ones don’t manage intellectual capital (IC) and the competitors do, then they will be beaten because the latter will get better results, being more competitive (Elias & Scarbrough, 2004). Intangible resources are more likely than tangible resources to produce a competitive advantage (John & Suresh, 2011). The recognition that much of the added value created by companies is becoming more and more conditional on intangible assets other than physical capital has stimulated a vast literature resulted by researches in the area of intellectual capital, human capital and intangible assets, highlighting the importance of IC management to add value and competitive advantage (Bontis, 2001; Bontis & Fitz-Enz, 2002; Carson et al., 2004; Edvinsson, 2000; Edvinsson & Malone, 1997; Elias & Scarbrough, 2004; Roos & Roos, 1997; Stewart & Ruckdeschel, 1998; Sveiby, 1997; Wright & Kehoe, 2008).

Companies look to be ahead in its segment, or remain in the market. Therefore, it is necessary to obtain competitive advantage, going to have to continuously improve their management strategies (Ahuja & Ahuja, 2012; Bassey & Tapang, 2012; Campbell et al., 2012; Chadee & Raman, 2012). One of these is directly related to how innovative production processes are and how well they are managed (Hsu & Sabherwal, 2012), resulting in the launch of portfolios of projects that develop goods and/or services with time and cost savings and quality equal or superior to those previously produced. For this, IC and its knowledge are fundamental (Ahmed et al., 2004; Ahuja & Ahuja, 2012; Andrzej & Marian, 2009; Carla et al., 2011; Davis & Walker, 2009; DeCarolis & Deeds, 1999) and its wastage management is a factor that could be determinant (Bauch, 2004; Ferenhof, 2011; Locher, 2008; Ward, 2007). Scholars sustains that the effective management of people means that manpower planning must be a part of overall corporate strategy, for corporate goals determines the tasks that must be performed. But, how about the knowledge waste?

In this context, the research highlight the problem associated with the performance of IC, may be impacted, or not by the use of knowledge in part or in whole process, the loss and / or forgetfulness, or use knowledge that does not add value for the company, its customers consequently. The purpose of this paper as such is to develop a model to measure the knowledge waste in order to improve the performance of enterprises. First it provides a background on the aspects related with IC, wastes and enterprise performance. Second it explains more deeply the concept of knowledge waste. Third the main results and gaps identified by a systematic literature review. Forth the conceptual model to mitigate knowledge wastes. Fifth the research approach to test the conceptual model. Finally the conclusions are drawn and further research recommendations are made.

IC can be the most powerful asset of an enterprise in promoting value and competitive advantage, being the most important organizational resource (Kaplan & Norton, 1996; Moon & Kym, 2006). IC is classified by Stewart (1997) as a composition of: Human Capital, Structural Capital and Customer Capital. The most accepted and spread classification is the one by Sveiby (1997) that breakdown IC into three categories: Human Capital, Relational Capital and Structural Capital. He defines human capital as “the capacity to act in a wide variety of situations to create both tangible and intangible assets”; structural capital as “patents, concepts, models, and computer and administrative systems”; and relational capital as “relationships with customers and suppliers”.

But what is IC? Stewart (1997) defines IC as: […] the sum of everything everybody in a company knows that gives it a competitive edge […] IC is intellectual material, knowledge, experience, intellectual property, information […] that can be put to use to create wealth.

Knowledge is an intangible asset of IC, and now a day is the most important asset to be management to archive competitive advantage (Bueno et al., 2003). The Human Capital consists of tacit and explicit knowledge, and this intangible assets can me measure by individual competence. At the same time, Structural Capital comprises knowledge: explicit, systematic and internalized measure by structural competence, on the other hand Relational Capital consists of the value of the relationship of the entire corporation with the external ambient, as can be seen at Figure 1. Thus, IC is the possession of knowledge, applied experience, organizational technology, customer relationships, and professional skill that provide a competitive edge in the market (Edvinsson and Malone, 1997). IC also captures both stocks and flows of an organization’s overall knowledge base (Bontis, 1999; Bontis et al., 2002). The indicators shown here reflects the IC that already exists on the enterprises and their portfolios, but not the lost of knowledge on It. 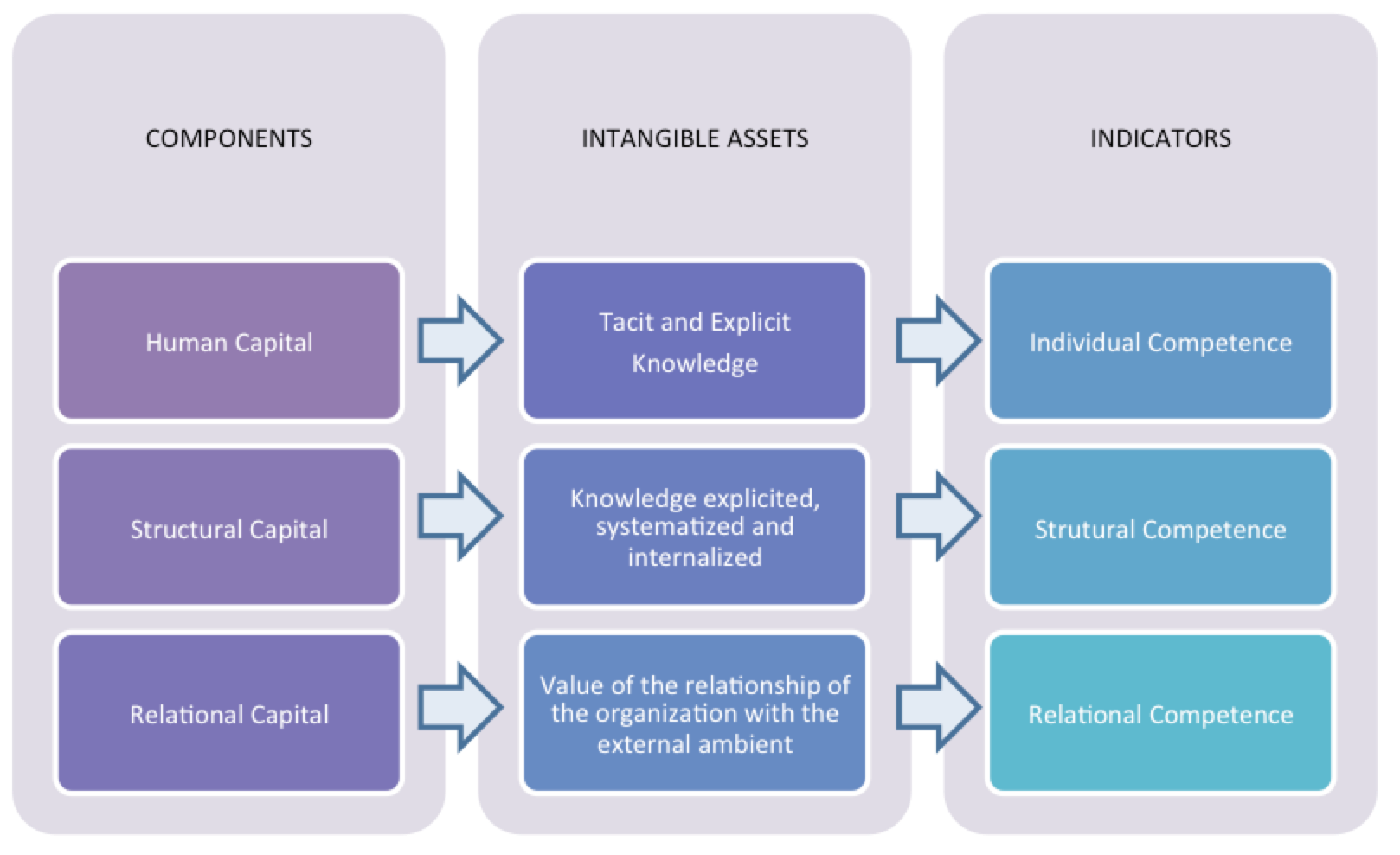 It can be seen then that the existing IC models deal with the measurement of the elements that build directly competitive advantage. But how-to measure the knowledge waste?

To understand the issues related to the knowledge waste and the impact into the competitive advantage, this study was based in the portfolio management perspective. The relationship between IC and performance in project management perspective was presented by Demartini and Paoloni (2011). They sustains that project managers’ knowledge and experience are considered important in determining project outcomes. The PMI (2013) explains Portfolio management as: the coordinated management of one or more portfolios to achieve organizational strategies and objectives. Portfolio management produces valuable information to support or alter organizational strategies and investment decisions. And a portfolio transforms the strategic objectives into actions (PMI, 2013). The portfolio then, will be our unit of analysis.

The meaning of knowledge waste is defined by Ferenhof (2011) as any failure in the process of knowledge conversion, better known as spiral of knowledge creation of Nonaka and Takeuchi (1997), which the waste is presented in the following ways: reinvention, lack of system discipline, underutilized people, scatter, hand-off, wishful thinking (Ferenhof, 2011), as detailed below.

Reinvention is a type of waste that happens if the organization does not reuse the designed solutions, components, projects, experiences or knowledge acquired previously. Many companies and employees do not pay attention to the fact that instead of creating a new project from scratch, uncertainly, they can increase the chances of success by reusing previous knowledge, ie, parts or whole projects and/or process already designed, tested and approved, as well as their experiences throughout their conception (Bauch, 2004; Ferenhof, 2011).

Lack of system discipline covers a number of factors related to clarity of objectives outlined in the system: goals and objectives obscure; unclear rights, roles and responsibilities; obscure rules; poor discipline of schedule; insufficient willingness to cooperate and; incompetence or lack of training (Bauch, 2004; Ferenhof, 2011).

Underutilized people, employees are not using their skills and expertise completely. Often are given very limited roles and responsibilities to them, when in reality, they could assume much more if the process was designed effectively, not wasting knowledge (Locher, 2008; Ferenhof, 2011).

Scatter, are the actions that make knowledge become ineffective by flow disturbance, basically disrupting the interaction required for teamwork. This category has two sub-categories: communication barriers and poor tools.

Hand-off occurs when one separates knowledge, responsibility, action and feedback. It results in decisions made by people who do not have enough knowledge to make the decision effectively or do not have the opportunity to accomplish it. As subcategories we have: useless information and waiting.

Wishful Thinking means to follow the subject’s own reasoning, based on desires rather than on facts or rationality, or the decision making based on one’s own desires for reality. For Ward (2007) this means operating in the dark, blindly making decisions without consistent data. It can be divided in: testing to specifications and discarded knowledge.

Ferenhof (2011) elucidates that by seeking to eliminate knowledge waste, it is expected that this flow deliver benefits and results to stakeholders in a more efficient and effective, with a focus on value considering the system as a whole: processes, people and technology. 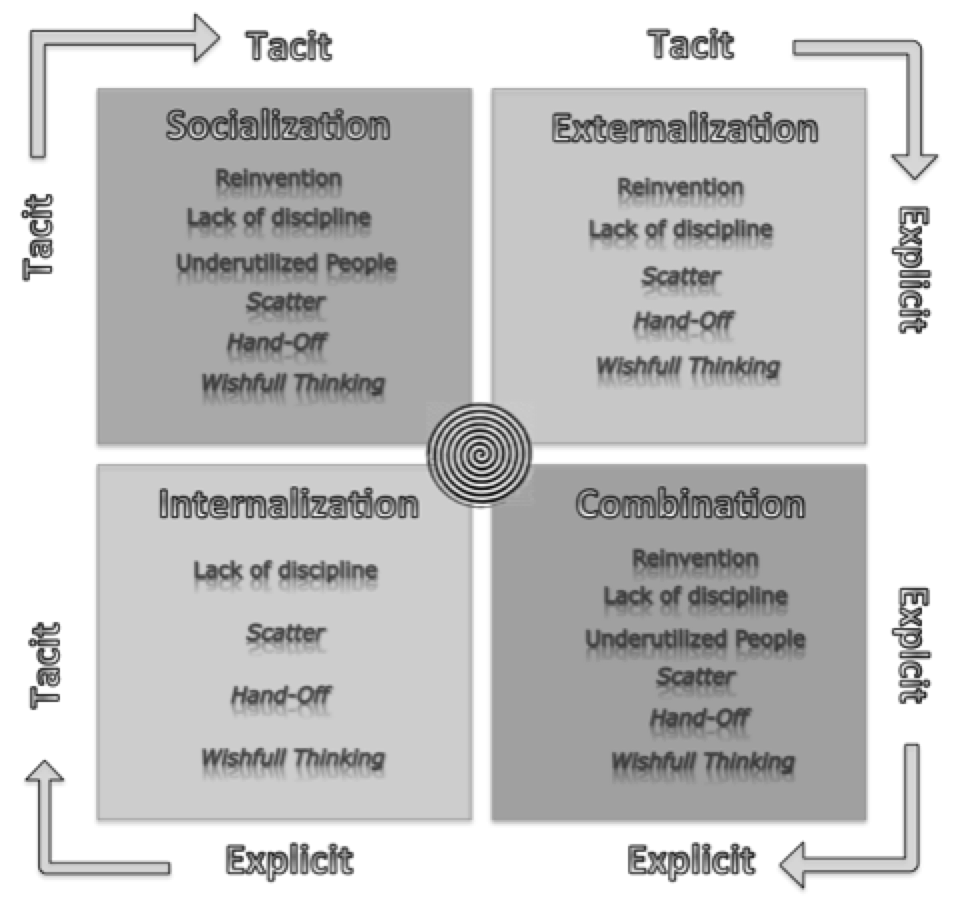 Bibliometric and systematic review proceeding was followed. It makes viable to organize the set of publications of a specific field. The resulting bibliographic portfolio allows to identify authors, their relationships and trends; it is one of its major contributions to science (Spinak, 1996).

These three stages will implicate the following procedures:

The data analysis and synthesis results were executed beginning with the creation of tables and graphics, presented below.

The research resulted in 506 articles, 491 of them without duplicates, which were systematically analysed. The exact numbers of publications that was returned by each database can be seen in Figure 3. 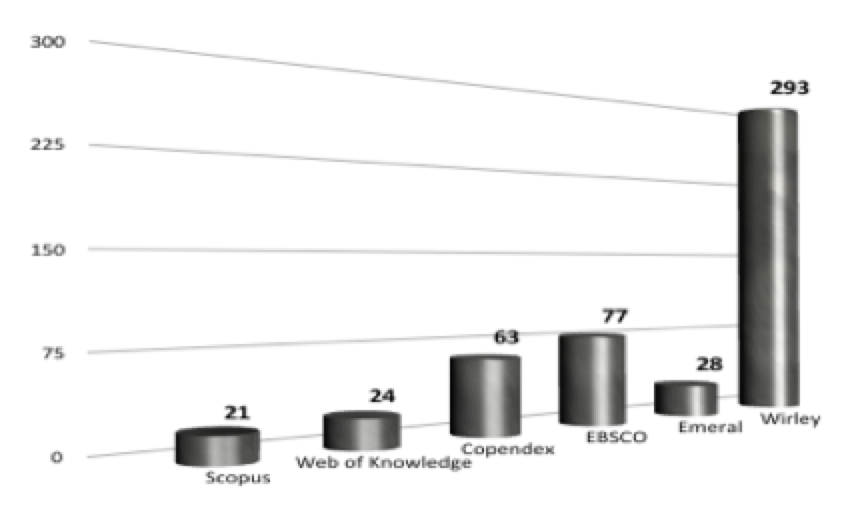 Only 160 of the 491 articles were aligned to our main research topic by reading the title, keywords and abstract. 24 of the 160 weren’t available the full text download. Resulting in 136 articles for full text reading analysis. After the analysis, 14 were not aligned with the theme, and were discarded from the portfolio, resulting in 122 relevant articles. Figure 4 shows the years of publications of the resulting portfolio.

The main results of articles analyzed can be summarized as:

What can be extracted is that the competitive advantage and the performance success of one enterprise are direct rated how well your IC is managed. It indicates an opportunity for knowledge management to eliminate or mitigate the knowledge wastes. As can be seen by the recommendations for future research from the bibliographic portfolio.

Table 1 – Recommendations for future research indicated by the bibliographic portfolio.

For each of the three categories of IC in Figure 1, we associated the knowledge wastes proposed by Ferenhof (2011) Figure 2. By this association (Figure 5), the listed knowledge waste may be occurring:

Key Performance Indicators (Knowledge Wastes Indicators), associated with each knowledge waste at each IC category must be created to the context that will be managed. As it’s exposed in Figure 5, Generic Model. 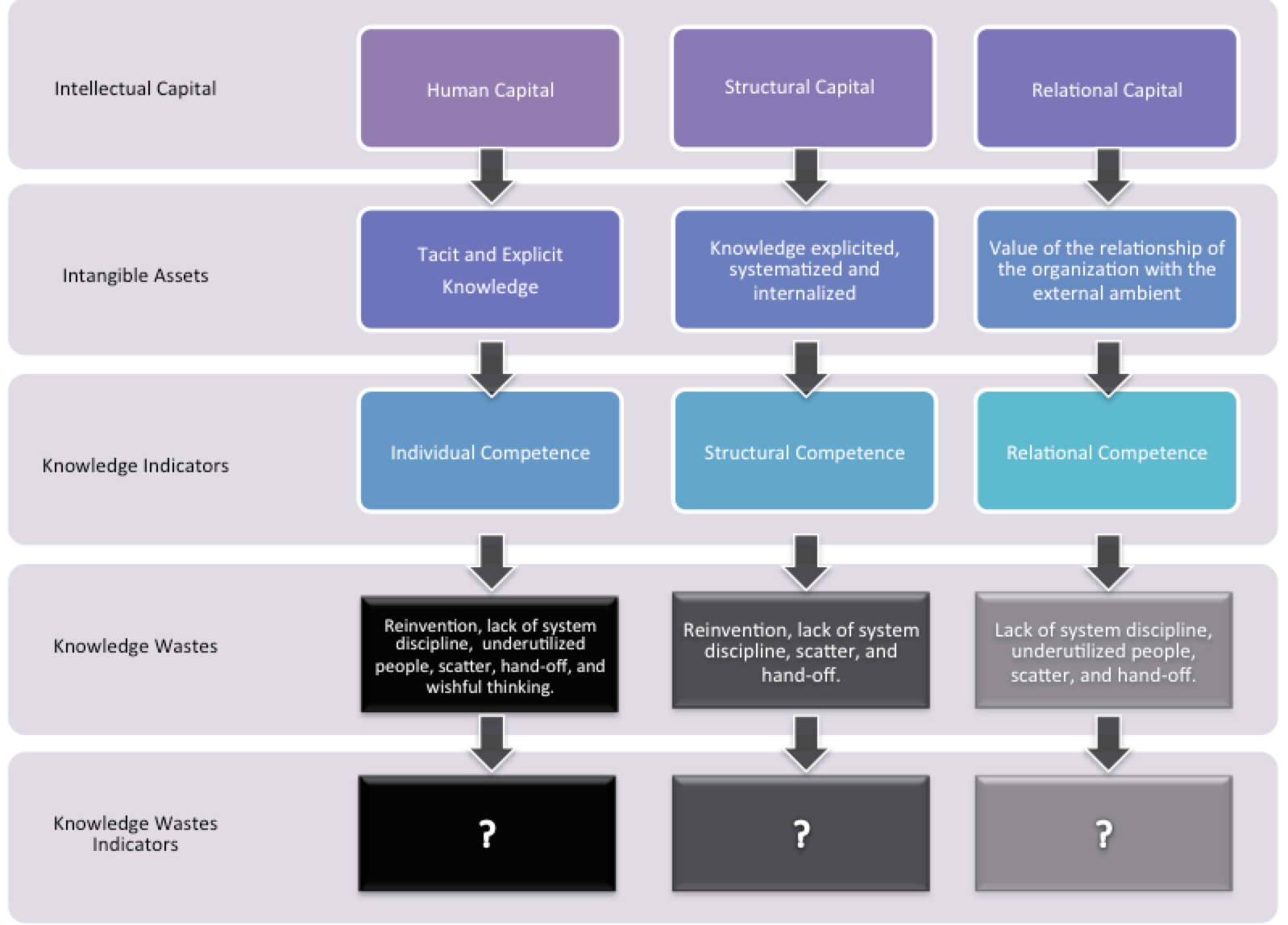 For testing the conceptual model presented in the previous section, it adopts a qualitative approach because it involves understanding of an event in their natural environment; fieldwork and results in a product description (Merriam, 1998).

We posit in-depth case studies into portfolio management of intensive knowledge organizations, which will permit the researchers to investigate in detail the interactions between the phenomenon under study and the contextual factors (Yin, 2009). Case study research would hence serve the following purposes:

The researchers have identified a few organizations in Brazil and England for carrying out the case studies.

How to cite this paper: 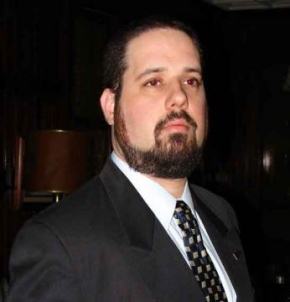